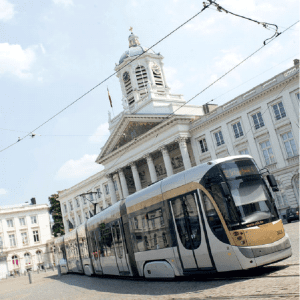 Brussels is a region of Belgium comprising 19 municipalities, including the City of Brussels, which is the capital of Belgium. The Brussels-Capital Region is located in the central portion of the country and is a part of both the French Community of Belgium and the Flemish Community. Brussels is the most densely populated and the richest region in Belgium. Brussels has a population of 1.2 million. Brussels grew from a small rural settlement on the river Senne to become an important city-region in Europe.
Brussels has an extensive network of both private or public transportation means. Public transportation includes Brussels buses, trams, the Brussels metro and railway stations served by public trains (operated by the SNCB). Bicycle-sharing and car-sharing public systems are also available.
Among one of the extensively used methods of transport is taxis. These taxis are comparatively cheap looking at the fact that they drop you off exactly to your desired destination. There are a number of companies allowing taxi services and amongst one of them is a leading company known as Taxi Brussels available at Charleroi airport and Brussels airport. The company gives easy access of passengers to cabs and have the most affordable prices with best possible quality with cabs. Make a reservation using our easy-to-use booking application and get an instant online price quote.

The complexity of the Belgian political landscape makes some transportation issues difficult to solve. The Brussels Capital Region is surrounded by the Flemish and Walloon regions, which means that the airports, as well as many roads serving Brussels (most notably the Brussels Ring) are located in the other two Belgian regions.

The Brussels metro was first opened in 1976 and has been expanding since, to comprise as of 2009 a set of four metro lines serving a total of 60 metro stations, most of which are underground. Brussels trams are an old transportation means in Brussels, operated by the STIB from 1954 on, but existing since 1869. The Brussels tram system evolved a lot over time, from a rise in the first half of the 20th century (246 km of tram rails were serviced in 1955) to a fall in the second half of the 20th century due to the popularization of transport by bus and by car.

The Infrabel railway network has a total of eight lines used by passenger trains, which lie partly of completely within the region of Brussels. Those lines serve a total of 29 railway stations in Brussels, all of which offer a correspondence with one or more STIB bus, tram and/or metro lines.